“Games are the Future of Advertising”

Let’s dive into the world of computer games! In his webinar, you can jump together with Krzysztof Kania into the universe of PC games, which has been around for near 50 years. Krzysztof will elaborate on why they are still considered the future of ads and how the road to get there is going to be. We take a look back at the history of in-game advertising over the last 50 years and analyzing the multiple rise and fall of the industry.

We will discuss technological advancement as a significant focus in the context of the expectations of gamers, developers, and advertisers from the 70′ to the present decade. The latest advancements in the world of mobile gaming have led to a totally different advertisement reality that was imagined a decade ago, and yet an unbelievable rise in the industry’s revenues. This phenomenon will be deeply discussed.

Read the accompanying interview on the webinar!

Never before has such a large number of people played computer games as they do today. According to estimates, the games industry generates more revenue than the film and music industries put together. For this reason, advertising in computer games has become an increasingly fast-growing industry.

In his interview, Krzysztof Kania explains the weaknesses and strengths of this advertising form. The medium itself creates a difficult challenge for the advertising industry: virtual worlds are all the more difficult to advertise the further away they are from our reality.  The special features of the gaming world give rise to exciting possibilities and opportunities for in-game advertising.

The great potential of this form of advertising also lies in being able to reach a huge audience, because gaming is a socially accepted form of entertainment for people of all ages and a global phenomena. 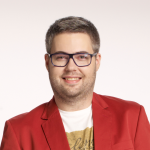 Krzysztof Kania is a sociologist and associate director at eye square. With 15 years of UX design and research experience, Krzysztof focus on implementing advanced technology-based market and UX research methodologies in Poland, Czech Republic, Slovakia and Hungary and conducting market research for gaming. Before eye square, Krzysztof worked as Head of UX at StepStone.